While Chevrolet recently released the all-new Silverado 1500 and the teaser photo of the new-generation HD models, the brand still keeps us uninformed about upcoming mid-size Colorado. The new Colorado could come refreshed or not but what seems more probable is the new special edition version ready to tackle off-road terrains.

The mid-size Colorado already has a highly capable ZR2 version which likes to go beyond the paved roads. This version joined the capable Z71 for the 2017 version but the 2019 Chevy Colorado ZR2 could get an even more hardcore off-road counterpart. Chevy joined with the American Expedition Vehicles showed the Colorado ZR2 AEV Concept at the 2017 SEMA Show and this off-road focused version could soon go to the production as per recent reports. The model will boast unique exterior and upgraded off-road hardware and should be more capable ZR2 version. Yes, the model will carry the ZR2 badge but suffixed with the Bison nameplate as Chevy has trademarked this name. 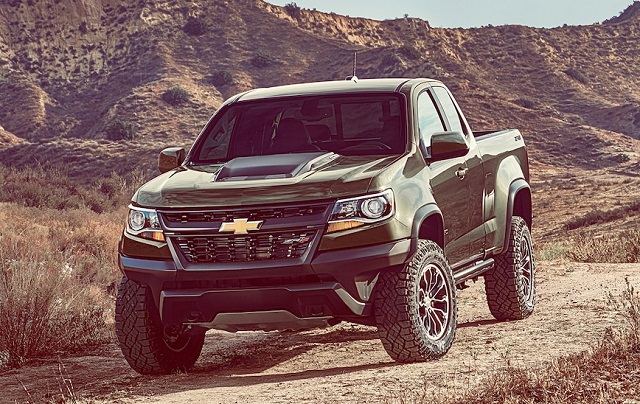 The look isn’t the priority for the ZR2 models but the upgrades applied to the truck also affects the way it looks. The 2019 Chevy Colorado ZR2 has a wider stance and lifted ride height. The unique grille, scooped hood, wider and protected fenders and special 17-inch wheels with 31-inch all-terrain tires change the perception.

The Bison version will also have its own identity when arrives and expect to be heavily influenced by the Concept version. The grille with the metal plate running through the middle and off-road bumpers combined with the unique wheel design, black cladding and special badging will make the difference. Mentioned elements will likely go to the production with little or no changes from what we saw on the concept version. However, we shouldn’t expect the snorkel, bed rack and access panel from the concept to reach the production.

The ZR2 models will also get unique finishes inside the cabin and will be equipped with modern electronics.

The seats and surfaces will wear high-quality materials combined with the contrasting stitching and trim elements. The ZR2 logos will also find the place on the headrest and few other positions. The model will also include the MyLink infotainment system with an 8-inch touchscreen interface and smartphone compatibility. 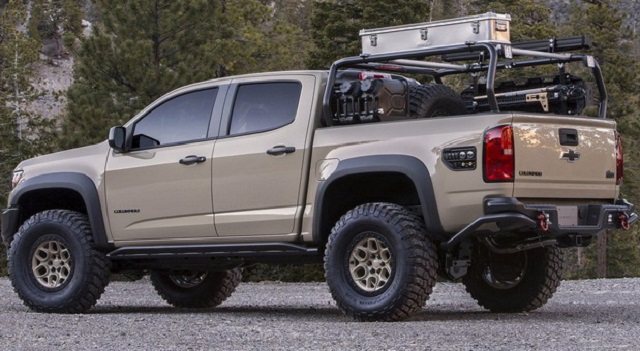 The 2019 Chevy Colorado ZR2 will have the lifted suspension and improved approach and departure angles combined with the underbody protection. The all-terrain tires will provide traction on all terrains while the locking differentials arm the model with the off-road capability. The Multimatic-branded Dynamic Suspension Spool Valve shocks will balance the suspension movement on all terrains.

The power for the ZR2 models will provide familiar engine and transmission options. A 3.6-liter V-6 and torquier 2.8-liter turbodiesel four-cylinder engine will be on the offer.