It has become hotter than ever in the pickup market with the arrival of the redesigned Silverado, Ram 1500 and new GMC Sierra. Ford did the same job earlier but the updated F-150 Raptor will hit the road as the 2019 model.

Chevy used the 100 years anniversary of building trucks to debut the new-generation Silverado 1500. The new model comes redesigned from the ground up and the number of variations is almost countless. Chevy will offer the new Silverado is eight trims and with six powertrain configurations. We are still learning about available options as Chevy constantly updates us with details.

However, what is sure, the new Silverado will offer the options for every taste. Ranging from the work truck versions and top-tier High Country, buyers will also have to choose many forms in between.

Chevy was also thinking of customers which like to engage the rugged terrains and the 2019 Chevy Silverado LT Trailboss will suit that purpose. This model builds on the recent redesign with the Z71 off-road package and suspension upgrades. The model also brings unique flair inside the cabin and out and could be the less capable alternative for Ford’s F-150 Raptor or equivalent for GMC’s Sierra AT4. 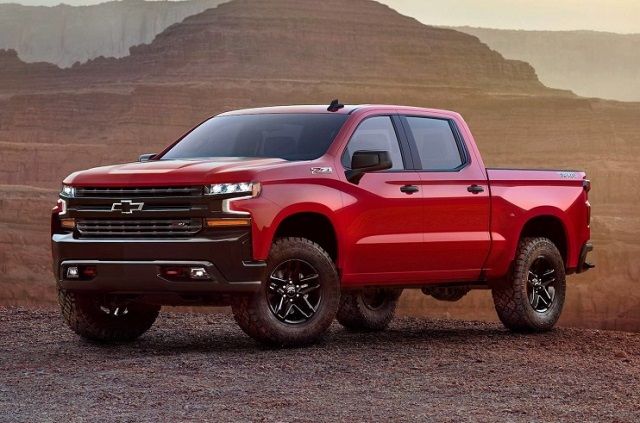 The all-new Silverado, in the first place, benefits from the significant structural improvements. The mixed-material formula provides improved structural rigidity and performance while at the same time the model is larger and weighs less. The high-tensile steel is used in a high percentage to build sturdier chassis as allow better performance and towing.

The new Silverado also adds new powertrain options combined with the upgraded versions of the familiar ones. The total number of power options is six. The 2019 Chevy Silverado LT Trailboss, as we learned so far, will get the base configuration with the 2.7-liter turbocharged four-cylinder engine and 8-speed automatic gearbox. This engine pumps 310 hp and torque of 348 lb-ft.

Under the hood of the LT Trailboss can also be a 5.3-liter V-8 engine. This unit makes 355 hp and torque of 383 lb-ft. The engine has improved design with the stop-start technology and the new Dynamic Fuel Management system.

On the other hand, we are not sure yet would Chevy offer the 6.3-liter V-8 engine in this version. Reports, however, claim that a 3.0 turbocharged inline-4 diesel mill will be optional in the Chevy off-road version. This engine will come in the combination with the 10-speed automatic and Chevy is yet to reveal its performance.

To attack the off-road paths, the LT Trailboss will equip some addition off-road hardware. The model will have 2-inch of the suspension lift combined with Rancho tuned shocks. There will also be additional underbody protection and the model will also use the locking rear differential and 18-inch wheels with all-terrain tires. 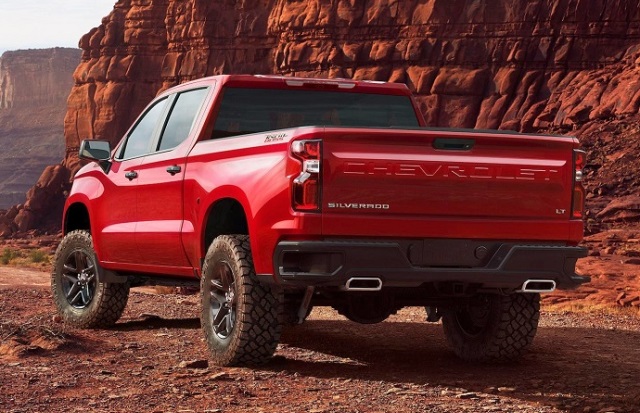 The 2019 Chevy Silverado LT Trailboss will be higher than other versions because of the suspension lift and robust all-terrain tiers on the 18-inch gloss black wheels will also add to its presence. The model will also include the black painted bumpers and unique blacked grille version combined with thin headlights.

Interior of the new Silverados will benefit from the additional space especially in the Crew Cab versions. The cab designs aren’t much different but the truck will deliver better materials and new textures. The Trailboss will have uniquely accentuated interior and special material combinations. It will also include the MyLink system with 8-inch display and Smartphone capabilities.