After the all-new GM’s light-duty trucks landed in the showrooms early in the year, the big brand switched the focus to the heavy-duty Ligue trucks. Chevy already revealed the teaser image of the new nose of the Silverado HD and several prototype models were spotted during the on-road testing. The one-ton 2020 Chevy Silverado 3500 HD model was caught by the spy camera as well and we have some insight into the styling and interior changes.

Still, many details are missing and the powertrain range remains the mystery. However, the styling and interior, as well as the tech equipment, should borrow heavily from the redesigned, half-ton Silverado 1500. Chevy said that new Chevy HD will go to production in late 2019. 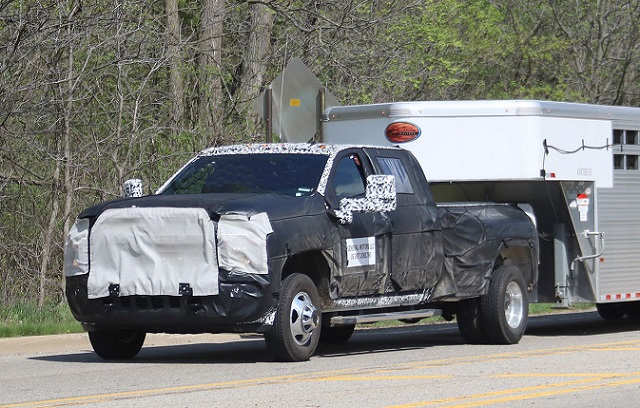 The Bowtie brand is testing the new HD models and several configurations of these trucks were caught while conducting the on-road tests. The 2020 Chevy Silverado 3500 HD was cruising on the with thick camo but some details can be recognized. The teaser image revealed earlier also give us the idea about the design of the front end.

The trucks will also have the muscular hood and diesel-powered version will also include the massive hood scoop. The profile of the model seems to have a sleeker design with softer fender flares and elegant lines.

The new heavy-duty models should also come larger and more comfortable and the lightweight materials will also reduce the weight.

The all-new Silverado 3500 will come with the higher quality interior and the new tech features. The changes in the size should bring more comfort, especially in the crew-cab versions. As for the design, don’t expect something much different from the light-duty model.

The heavy-duty Silverado will have a very similar center stack as the half-ton model and the similar control’s placement. The tech features will also include the latest infotainment platform while the advanced safety systems will also appear in the new generation version. 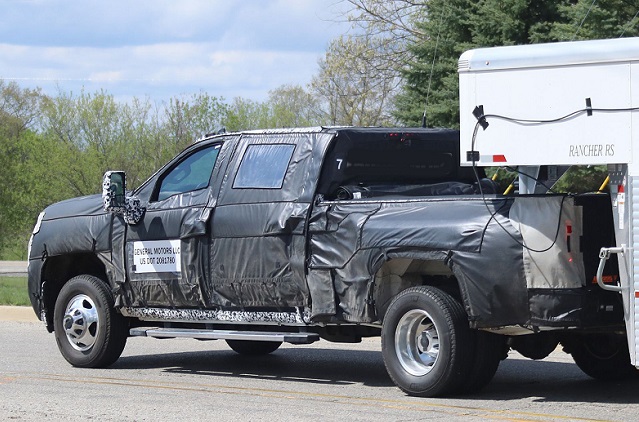 Details about the powertrain options are still out of reach. Chevy recently upgraded the 6.6-liter Duramax Diesel V-8 and this engine doesn’t have an alternative for now. The better power and torque ratings are likely. In the current form, the Duramax V-8 makes 445 hp and torque of 910 lb-ft.

The Vortec 6.0-liter V-8 gas engine will likely stay but probably with improved effeminacy and performance.  It can now deliver 360 hp and torque of 380 lb-ft.

No sights that Chevy would introduce the new transmission system but the structural and performance upgrades will provide better towing and payload capability.

The all-new 2020 Chevy Silverado 3500 HD will go to the production in last quarter of 2019. The production will take place at the Flint, Michigan plant. The upgrades will likely push the price slightly upper.