The fun-to-drive, off-road capable pickup truck versions have gained great popularity among the truck buyers. When the high performance and off-roading is mentioned the first association, of course, is the currently most capable Ford F-150 Raptor. The off-road-ready but less capable Chevy Trailboss and GMC Sierra AT4 also appeared with the recent redesign and Ram confirmed its intentions to bring the Hellcat-powered Rebel TRX model to the game. However, if the latest rumors in the industry turn out to be true, Nissan might introduce something more bigger and very capable to the game.

Well, Nissan presented the design study concept at the 2016 Detroit Auto Show and the rumors now claim that the Titian Warrior Concept formula could go to the production. Nissan hasn’t commented to the rumors but if they are something to go by the aggressively styled and off-road ready 2019 Nissan Titian Warrior could appear soon. 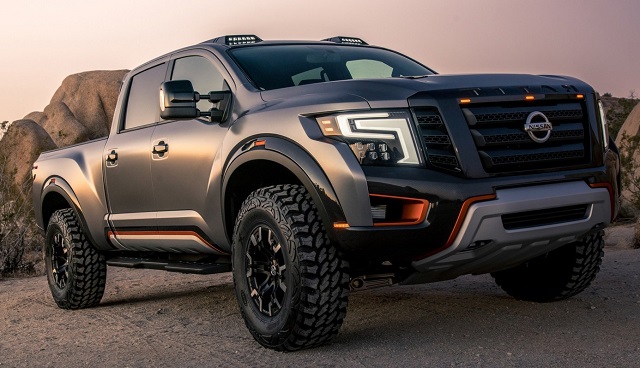 Well if the 2019 Nissan Titan Warrior actually sees the production it would something a bit bigger than mentioned full-size, light-duty, off-road models. The Titan XD splits the difference between the light-duty and heavy-duty segments and the Titian Warrior builds on it. That could be the first advantage of this model if it hits the stage as it will allow more load and towing than the light-duty model.

However, the style should also standout this model from the rest if it adopts from the Warrior Concept model which Nissan called the “Modern Armor” exterior. The Concept model had black-framed Nissan’s grille version and some futuristic LED headlights. The sculpted front bumper and massive front skid plate also make it more robust and also serve to the function. The contrasting accents and swollen fenders also add to the appearance and the concept also had nice graphics taillights.

However, to the production (if the model appears) it will likely go with much toned-down styling. It will likely get more conventional headlights and fewer flourishes. It would likely keep the skid plate, unique grille, hood vents, etc.

The model would also ride higher than the conventional versions and the Concept was 3 inches higher to the ground and with the 18-inch aluminum-alloy wheels with the 37-inch all-terrain tires. The model could also be slightly wider while should keep the same wheelbase as the current Titian XD.

The model should get the sports steering wheels and shift paddle plus the performance gauge cluster. There should also be the latest in-car technologies from Nissan including the infotainment system, a premium sound system and some active safety systems. 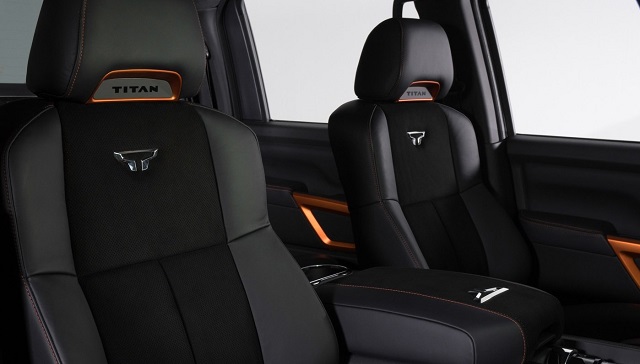 The rumors claim that the 2019 Nissan Titian Warrior will mimic the running gear from the Concept model to the great extent. So, the Titian Warrior should use the same fully-boxed chassis and the high-torque 5.0-liter Cummins V-8 Turbo Diesel engine. The engine should work in the combination with the heavy-duty 6-speed Aisin transmission. The power and torque this engine delivers in the current Titan XD are 310 hp and 555 lb-ft but the Warrior could go up with these.

Nissan hasn’t confirmed it has the Titan Warrior for the production in the mind. The rumors claim the 2019 Nissan Titan Warrior late in the year and the price as high as $55, 000.