Ram will bring the redesigned heavy-duty truck range for the 2020 model year and the prototype versions were spotted on several occasions while conducting on-road testing. We saw the dually Ram 3500 and Power Wagon version but the ¾-ton 2020 Ram 2500 has also been testing and several configurations and trims were caught on the camera. The pictures of the interior also appeared.

Based on what we know so far, the HD models will follow the similar pattern as the recently redesigned light-duty, Ram 1500 regarding the design, interior and technology while will keep the powerful and tested engine options. Ram will try to provide better efficiency of the engines and should also introduce the new transmission system. 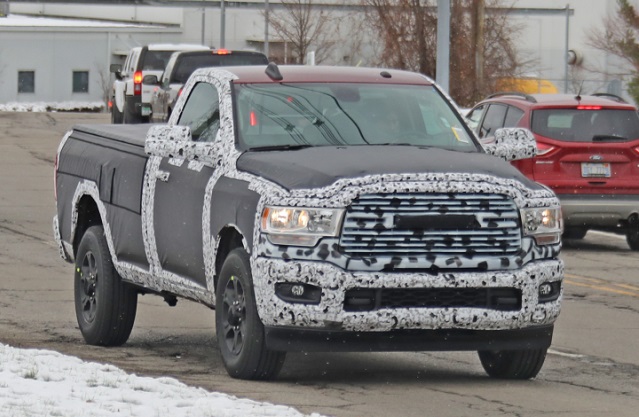 When it comes to exterior design, it seems based on the spy photos, that the 2020 Ram 2500 will use the same logic as the handsome, all-new, half-ton, Ram 1500. The camouflaged prototypes seem to have the same shape of the nose and styling elements as the smaller cousin. The contours of the elements look familiar to that of the smaller model and that applies to the shape of the grille and headlights. Plus, it looks that HD models also have a less rugged exterior with softer and more streamlined shape.

With the similar styling, the Ram 2500 HD should also apply the same structural upgrades as the fast-selling Ram 1500. With the use of the high-percentage, high-strength steel in the chassis and the aluminum alloys for some body parts, the model should provide higher structural rigidity and weigh several hundred pounds less. The extended length could also improve the interior comfort.

Inside the cabin, the Ram 2500 should also inherit the same design of the dash and equipment from the light-duty model. The spy photo reveals the same dashboard layout and large center display. The model will integrate the new touchscreen display between the air vents like in the Ram 1500 and more manual controls below. The display sizes will likely be in the same configurations as the brand offers in the half-ton Ram. The Uconnect infotainment system will come with the 5-inch display in the base version likely. The upper grades will come with the 8.4-inch interface. The massive 12.0- inch display should also be available.

The HD truck will gain the latest, active safety systems that Ram offers also in the new-generation Ram 1500. There will also be an array of the material options and high-luxury features followed by the unique styling and interior elements inside and out, depending on trim level. 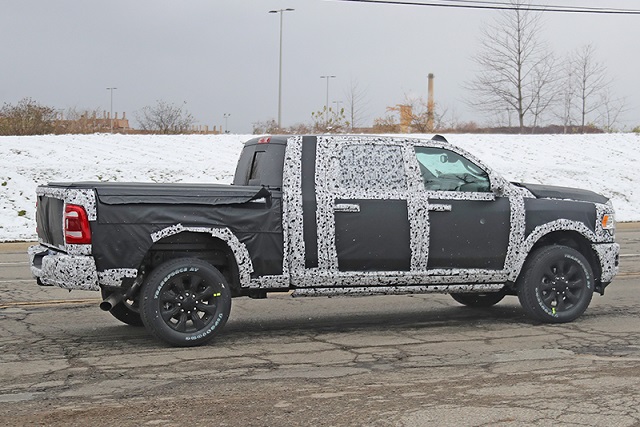 The redesigned 2020 Ram 2500 should return with the familiar engine options as the latest reports indicate. No official details on the topic from the FCA.

Some sources suggest, however, that the current, base 5.7-liter V-8 383 hp engine could be discontinued. The 6.4-liter V-8 will surely return but likely with the improved efficiency and ratings. The current version makes 410 hp and torque of 429 lb-ft.

The proven 6.7-liter Cummins diesel six-cylinder will again provide the best towing capability and likely better performance. The current diesel-powered Ram 2500 gets 370 hp and 800 lb-ft of torque in the combination with the heavy-duty six-speed automatic transmission. The engine delivers 930 lb-ft in the 3500 version. But the new-generation model could boost the performance and the new 8-speed automatic transmission will also appear with the upcoming RAM HD.

The new 2020 Ram 2500 should appear undisguised early next year. Ram will likely keep the price range close to the current.