Ram’s by far best-selling model, the Ram 1500 is the new from the ground up for the 2019 model year. But the buyers who need the larger-scale towing and payload capability will also have a chance to get the all-new heavy-duty Rams. Ram has been conducting the testing of the HD models and the 2020 Ram 3500 HD has been in the front of the spy cameras several times. The model was caught in different configurations but every time wrapped in thick padding.

However, despite the heavy camo and lack of the official details, the new HD models will borrow heavily from the best-selling, light-duty model. That includes the styling elements, interior design and modern tech and safety features. The engine range will likely remain the same. 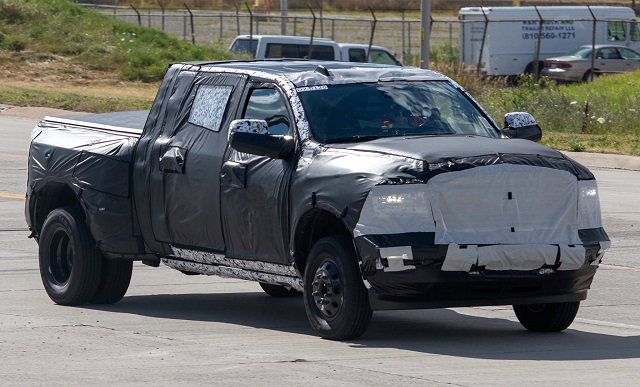 Despite heavily camouflaged the prototype version of the 2020 Ram 3500 HD can’t hide similarities with the recently redesigned Ram 1500. It is almost the usual strategy of the truck brands to follow the similar design pattern when redesigning the heavy-duty models as they did on the light-duty versions. The Ram 350 won’t be an exception.

Under the thick camo, we can detect the similar contours of the headlights and grille as on the all-new light-duty Ram but in larger proportions of course. So, the heavy-duty Rams will also ditch the crosshair grille style and get the sleeker body contours.

The model will also follow the same route as the light-duty version when it comes to the interior design. Judging by the latest spy photos, the heavy-towing models will integrate the same center stack design as the half-ton Ram. The 8.4-inch touchscreen-based infotainment system will appear in the one-ton version and the large 12.0-inch option should also be available in the high-value versions.

Ram will also add more standard equipment and boost material and refinement inside the cabin. The models will also gain the advanced safety systems that debuted also in the new generation Ram 1500. 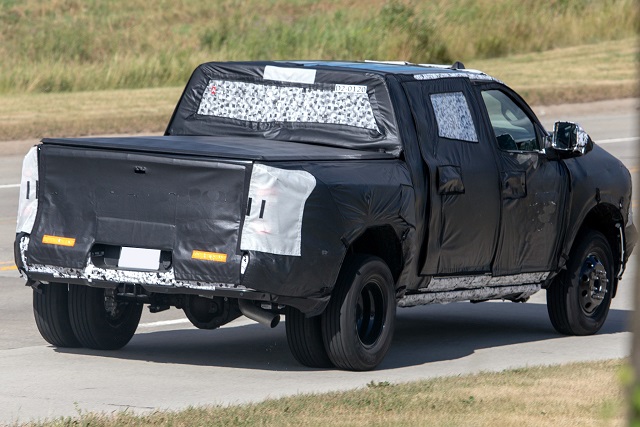 When it comes to the powertrain options, we don’t have hints that Ram will make radical changes. The range of engines will likely stay familiar but some sources suggest that a new version might ditch the 5.7-liter V-8 engine.

The base V-8 unit makes 383 hp and torque 400 pound-feet in the current version. It comes in the pair with the six-speed automatic transmission which will likely go to the new-generation version as well.

Other two engines from the current one-ton Ram should also be the part of the 2020 Ram 3500 HD version. A 6.4-liter V-8 gasoline engine will likely boost the efficiency and be again around 410 hp and 429 lb-ft of torque.

The 6.7-liter turbodiesel six-cylinder engine will get the upgraded automatic transmission version. Ram will likely try to improve the horsepower and torque ratings to go against one-ton Ford and Chevy models.

The 2020 Ram 3500 HD will likely make the debut in early 2020. The price should go slightly up considering the expected upgrades.