The Toyota Tacoma has been at the top of the sells chart in its class for more than a decade. To that adds Toyota’s fabled reliability and toughness and the resale value contributes as well. But another factor which adds to model’s reputation is certainly the great off-road ability.

The Tacoma comes in a few off-road versions but the TRD Pro version is the most capable one. This trim skipped the 2016 model year but returned with the new-generation Tacoma for the 2017 version. Now the Toyota Racing Development team brings the updated 2019 Toyota Tacoma TRD Pro version.

The 2019 Toyota Tacoma TRD Pro doesn’t come with the upgrades under the hood. A familiar 3.5-liter V-6 engine is again Toyota’s choice. This engine pumps 278 hp and torque of 265 pound-feet. By default, this engine comes in the combination with the six-speed manual transmission. For the more money, the six-speed automatic unit enters the game.

The model also benefits from the Crawl Control and Multi-Terrain Control system. The system can switch between five modes and adjusts several parameters to provide the best performance depending on the terrain.

The new TRD Pro also gets improved suspension components. The FOX internal Bypass Shocks add a 1-inch of the suspension lift. The body of these is a 2.5 inch in diameter while the pistons are 46 mm large. The front suspension section has 8 bypass zones while the rear upgrades to 11. The rear section also comes with the 2.0-inch remote reservoirs which provide greater fluid capacity. That helps to keep the temperature in check during the off-road duty.

This model also has the front skid plate with the red TRD lettering and the TRD exhaust system. The 16-inch alloy wheels also contribute to the performance. They come with the Goodyear Wrangler Kevlar Off-Road tires which provide all-terrain grip and also 1-inch wider track. 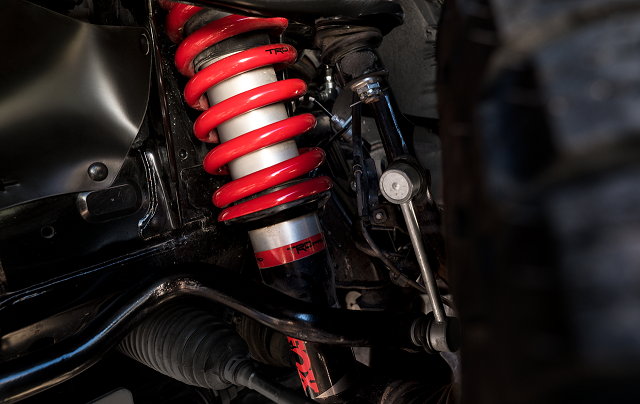 The style of the 2019 Toyota Tacoma TRD Pro is also special. The model has the large grille with TOYOTA lettering and the Rigid Industries LED fog lights. The front skid plate and mentioned wheels and tires also make it look more capable.

The attractive feature is also the new Desert Air intake. It isn’t just the snorkel as it also provides the clean air as it sucks the air higher from the dirt trails and from the exhaust of the vehicles ahead.

Interior of the model also has the special treatment. The black seats have the red contrasting stitching and the TRD logos on the headrests. The floor mats and shift knob are also the TRD-branded.