The full-size segment gains several redesigned models for the 2019 market year to go against the recently refreshed and the best-selling Ford F-150. The Toyota Tundra also received the mid-update for the 2018 version with the added safety tech, revised interior and exterior styling plus the TRD Sport trim. Now for the 2019 model year, Toyota enters with another TRD version. This time, Toyota team returns the TRD Pro version in the more styled and capable form.

The 2019 Toyota Tundra TRD Pro is coming after the year of hiatus and Toyota Racing Development team brings several mechanical revisions which promise better performance. The styling also gets special treatment as well as the interior. The TRD Pro version will also be in the offer of the Tacoma and 4Runner. 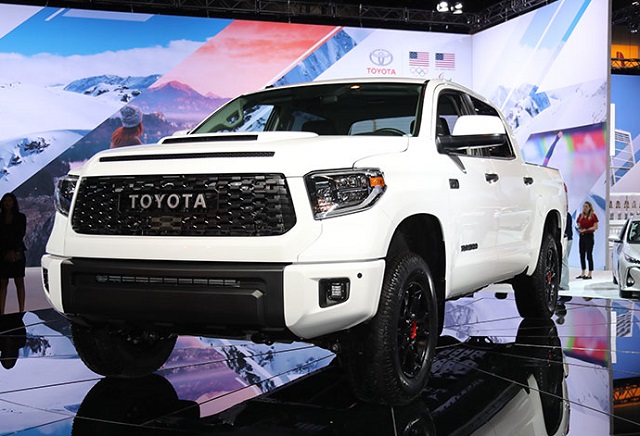 The 2019 Toyota Tundra TRD Pro is the version who specialized the off-road performance but with the new hardware upgrades, the TRD Pro should be better on the paved roads as well.

The TRD Pro begins the transformation with the new suspension elements. The 2.5-inch Fox off-road shocks with the internal-bypass setup replace the 2.5-inch Bilstein units on the previous version.  The 2.5 inches in diameter, the new dampers also have 46mm-thick pistons. The rear setup also includes the external reservoirs with more oil and improved heat capacity. The new shocks also provide more bypass zones, 11 up front and 12 on the rear side. This should provide a better ride on the road and the damping will also change to absorb bumps and rugged terrains.

The TRD Pro version also has 2 inches of the front lift while the front wheel travel has a 1.5-inch increase and the rear 2 inches. This means higher stance and improved wheel articulation. The model also includes the underbody protection and special wheels. The BBS-branded aluminum forged 18-inch units come with the Michelin P275/65R18 all-terrain tires.

The power for the Tundra TRD Pro comes from the 5.7-liter V-8 engine. It provides 381 horsepower and torque of 401 pound-feet. The engine is in the pair with the six-speed automatic gearbox. The TRD Pro also uses the part-time four-wheel-drive system with the two-speed electronically operated transfer case. 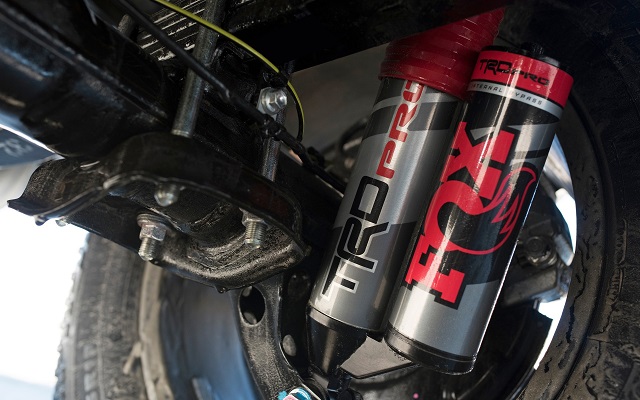 The 2019 Toyota Tundra TRD Pro also builds its look over the conventional versions to suit the purpose and also make the visual point.

The black TRD mesh grille with the TOYOTA lettering is up front combined with Rigid Industries black-accentuated headlights and LED fog lights. The model also possesses the new two-section hood scoop and the moonroof.

The front skid plate with the red TRD stamping and mentioned wheels plus front tow hooks are also the part of model’s package.

Interior of the model comes in with the black theme and contrasting elements. The black leather covers the dash and seats. The red contrasting stitching is also used on the seats and dash. The TRD Pro logo is also put on the headrests and model also includes specific gear knob and black floor mats.

The 2019 Toyota Tundra TRD Pro will come in two cab styles including the Double Cab and Crew Max. The model will enter the market this fall. Toyota waits closer to the launch date to reveal the price. Expect it to start at around $44, 000.