Volkswagen has long been rumored to bring the pickup truck version on the US soil. Since the introduction of the globally successful VW Amarok in 2010, this model has been expected to get the green light for the US export. VW has never promised the Amarok for the US market but with the recently presented the VW Atlas Tanoak concept, VW might hint the arrival of the new unibody pickup truck the stateside. Although VW admitted it has room to expand the SUV range further in this market, the Concept is surely there to explore the reaction of the market.

And according to the recent reports the Tanoak Concept vehicle might soon get the green light for the production and arrive as the 2019 VW Atlas Tanoak Pickup Truck. It seems too early however and VW hasn’t commented on this rumor. However, since the fleshy exterior styling only divides the Concept model from the production form as it has many in-production parts from the three-row Atlas SUV, VW wouldn’t need much effort to prepare it for the production. 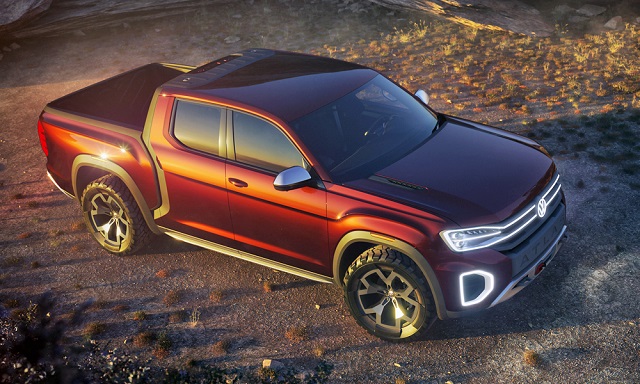 The Tanoak Concept is based on the highly flexible MQB platform which also makes the base of the Atlas SUV which VW designed to meet the standards of the US buyers. The Concept has the proportions of the large mid-size model with 214 inches in length while is 80 inches wide and 72 inches tall. The model is actually 16 longer than twin SUV and has 3 inches more in length than the all-new Ford Ranger. With that, the Tanoak has highly practical cargo bed and the 2019 VW Atlas Tanoak Pickup Truck is expected to keep the similar proportions as the reports claim.

In the cabin, the story should also be familiar from the there-row Atlas SUV. The dash will have the same design and the quality of materials would be similar.

The equipment level would also be almost identical. The model would offer the latest version of the infotainment system and the Digital Cockpit design. There will also be available luxury features like the leather upholstery, heated seats, a sunroof, premium sound system and more. The production version would also include the active safety systems such as adaptive cruise control, automatic emergency braking, lane keep assist, etc. 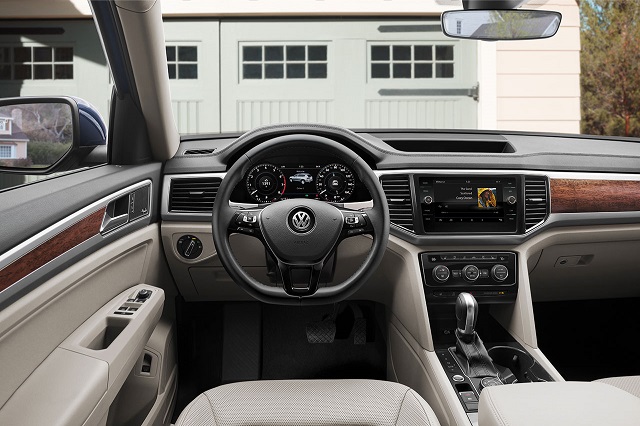 The Concept version doesn’t only share the MQB platform with the Atlas SUV yet it uses much of the mode’s hardware.  A 3.6-liter V-6 engine from the SUV model produces 276 horsepower and 266 pound-feet of torque. An 8-speed automatic transmission and 4Motion all-wheel-drive setup are used in the Tanoak Concept. With this hardware VW promise 60 mph in 8.5 seconds.

The 2019 VW Atlas Tanoak Pickup Truck would also offer a 2.0-liter four-cylinder engine which is the base unit in the Atlas SUV. This engine makes 235 hp and torque of 258 pound-feet.

The SUV-like unibody design and suspension would provide more composed handling and comfort than the traditional body-on-frame design on the most of the mid-size trucks. With this design, the Atlas Tanoak pickup would be a direct rival to the Honda Ridgeline.

No confirmation from VW about the arrival of the 2019 VW Atlas Tanoak Pickup Truck. The model is more likely for the launch for the next decade. The estimated price is around $30, 000.