The pickup trucks are the moneymakers in the US. VW has the successful formula embodied in the mid-size Amarok truck and sold outside the US. However, the German carmaker could soon join other pickup trucks in the US as it recently presented the VW Atlas Tanoak Concept Pickup Truck.

This mid-sized Concept has a flamboyant exterior design but the interior seems like the production ready. The model uses the Atlas SUV powertrain and platform. So, if it gets the green light for the production the model will join the Honda Ridgeline as another uni-body truck design while the global Amarok exploits the body-on-frame architecture. 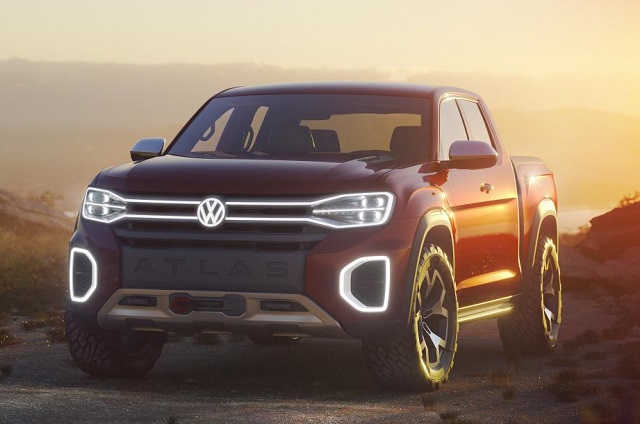 The Atlas Tanoak Pickup is the seven-seat Atlas SUV based model which arrived at the US for the 2017 model year. Two models share VW’s MQB modular platform and the Tanoak is slightly above the mid-size truck size. Compared to the Atlas SUV it rides on stretched wheelbase and has 15.8 inches longer footprint. In total it measures 214.1 inches which makes it 3 inches longer than recently reintroduced Ford Ranger.

Being the concept version, it has also some flourishes like the illuminated grill, front logo and headlight surround. The tailgate also has plenty of illumination as well as the VW badging and Atlas stamping. The wraparound red LED lights come in the combination with the taillights and model also uses the 20-inch wheels.

Inside the cabin, the Tanoak Concept closes more to the production-ready form. It offers five seating positions with individual seats for the rear passengers and sporty contoured front seating.

The model also includes uniquely designed dash and its elements including the steering wheel compared to the Atlas SUV. The infotainment system is managed via the 10.1-inch center touchscreen and gesture control. The heavily digitalized cabin also includes the 12.3-inch digital instrument cluster. VW made most of the operations manipulated via digital controls including the air conditioning system. 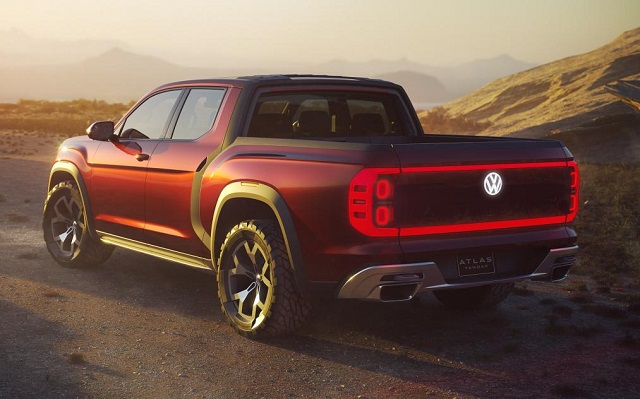 The SUV-based VW Atlas Tanoak Concept has familiar engine under the hood. Power is provided by the 3.6-liter V-6 engine which VW also uses in the Atlas SUV. This engine makes 276 horsepower and torque of 266 pound-feet matching the ratings of the seven-seat SUV.

The truck also uses an 8-speed automatic transmission to route power to the 4Motion all-wheel-drive system. The Tanoak is also equipped with the different drive modes. VW claims the 60-mph sprint in 8.5 seconds.

The VW Atlas Tanoak Concept hasn’t been planned to get the production version as VW says. VW also claims that full-size market in the US isn’t opened currently for the newcomer in the level which VW wants. On the other hand, the mid-size segment sales don’t also match VW’s interest as was said from the company. What’s more, VW claims it has plenty of room to grow in the existing offer and don’t see the truck segment as the priority. However, we won’t be surprised if VW changes the mind in the near future.